Soo Catwoman is a highly influential and inspirational figure, whose image has loomed large in public consciousness for the past 46 years.  She has pushed forward the frontiers of fashion with her handmade clothing accessories, her striking make up and of course her signature ‘Soo Catwoman’ hairstyle.  She remains a huge inspiration in the worlds of music, art and fashion, her image is timeless and as striking today as it was in 1976.

It is difficult to express to a modern readership just how groundbreakingly creative and unique her image was when it first became known in the 1970s.  Her face appeared everywhere, used by everyone.  Soo’s image was sometimes used cynically by those trying to market their own products, others tried to claim her creations as their own, while Soo lived her private life in silent dignity. 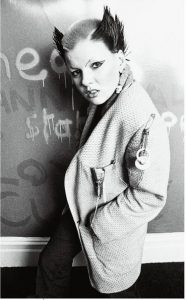 Soo’s image endures when others have fallen away, because it comes from the heart. Her rebellion was not one of anarchy, violence or profanity, hers was a silent, visual statement of personal freedom and individual expression.  As such, it continues to captivate, enchant and inspire new generations, for it is timeless.  Here, on her own website, you may learn something of the lady herself.

Please note: All written content on this website is the sole copyright of ©Soo Catwoman 2015. The images are copyright of their respective owners. No permission is given or implied for use of the content in these pages elsewhere but on this site.